Contemporary art can be provocative. A piece that intrigues some may exacerbate others. To understand these polarizing subjects and the politics behind them, KAZoART has compiled a list of works that made headlines for their astounding albeit scandalous qualities.

Our Selection of Political Art 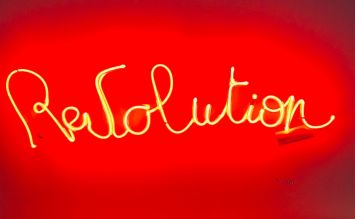 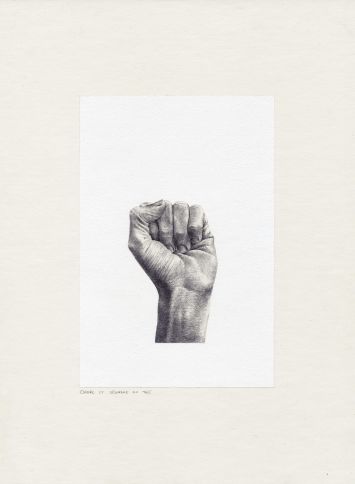 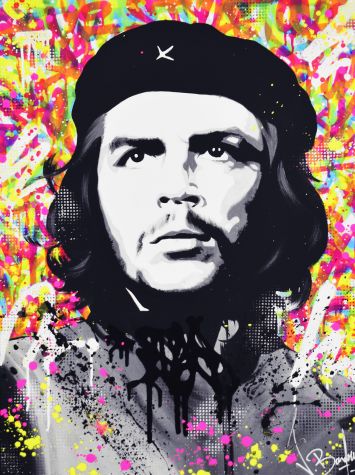 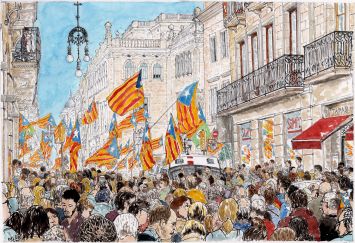 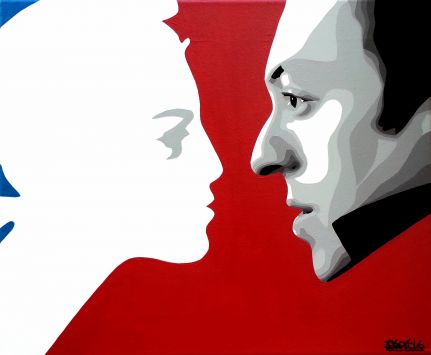 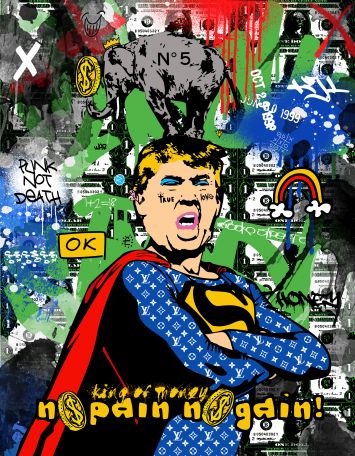 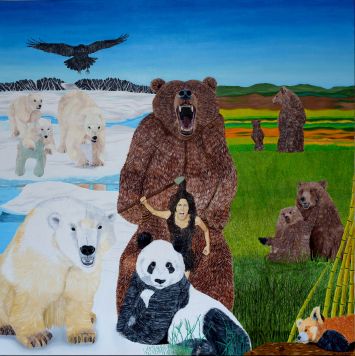 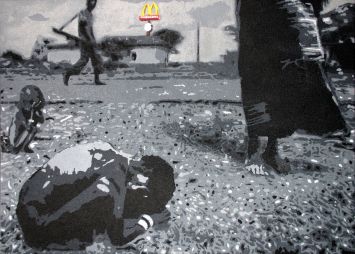 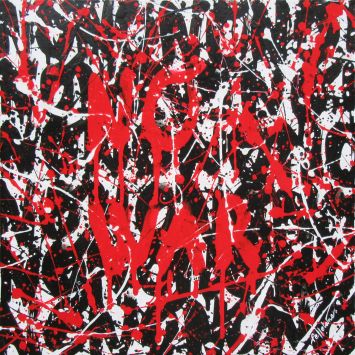 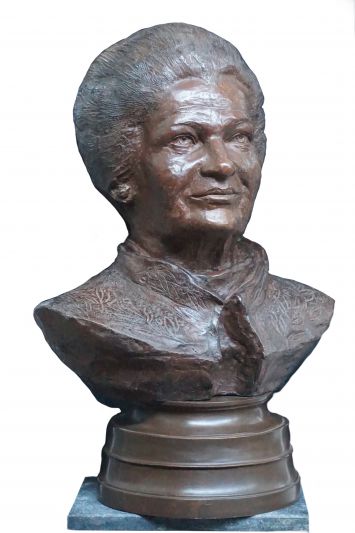 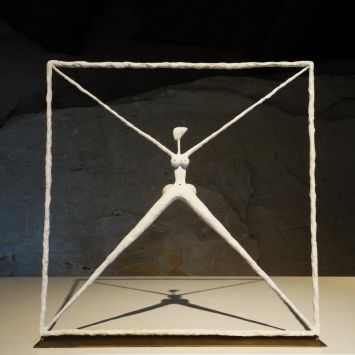 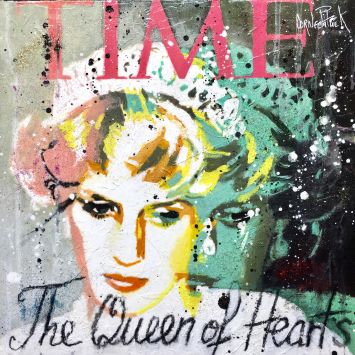 Lady diana, the queen of hearts, pink and green version 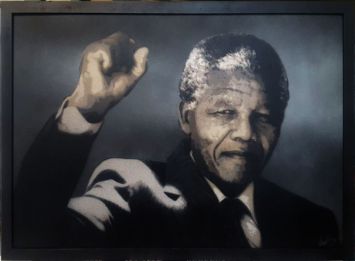 Bombay-born Kapoor is the British sculptor behind this colossal installation which once resided in the gardens of the Chateau of Versailles. Making no effort to hide his work’s obvious sexual connotation, Dirty Corner was rebranded in the media as The Queen’s Vagina and was subsequently defaced and vandalised with graffiti over the years.

Kapoor chose not to remove the often antisemitic scrawls, preferring to shine a light on the intolerance of society. However, the French courts pushed back on Kapoor’s decision, arguing that it was allowing hateful messages to go unchecked. Meeting in the middle, Kapoor decided instead to cover the vandalised parts of his sculpture with gold leaf, thereby allowing both states of the sculpture to exist on top of one another.

The title of this work is an acronym of “Liberty, Hate, Vendetta and Eternity.” In 2010, the Italian artist, Cattelan, installed this giant extremity in front of the Milan Stock Exchange. Made entirely of Carrara marble, the figure of a hand appears with only one erect middle finger. So in its most literal sense, the artist gave the financial institution a massive, 11-metre tall, middle finger. Maurizio Cattelan now lives in New York where his work is highly sought after by affluent collectors.

This American artist is known for creating massive inflatable structures whose forms are often ambiguous and polysemic in nature. Such is his Tree, which was erected on Place Vendôme in Paris in 2014. McCarthy’s blatant allusion to a sex toy generated so much controversy, and was vandalised so many times, that it eventually had to be dismantled.

Known for the sexually-charged statues of himself and his partner, Cicciolina, in explicit positions, Koons is the unapologetic king of all that is kitsch. These ideals clashed with the public image of the Chateau of Versailles; the setting for his colourful, eccentric and iconoclastic exhibition. For many aficionados the dissonance between subject and setting was too great, they thought that the artist’s work was ill-suited for such a historic site. Protests were organised, and entrances blocked by demonstrators in the back-lash.

5. Damien Hirst, The Physical Impossibility of Death in the Mind of Someone Living

Completed in 1991, one of Hirst’s best-known works is that of a shark suspended in a formaldehyde aquarium. As an ephemeral installation, this inevitably deteriorated over time and required a replacement. For Hirst, whose art relies heavily on symbolism, the tiger shark is a physical manifestation of the evils of our time.

Untoward, strange, and disturbing, Piccinini’s sculptures look like props from a science fiction film. Never ceasing to make us uncomfortable, childlike innocence is juxtaposed with a monstrous unworldly creature, and the two are brought together with an improbable complicity. This work nonetheless manages to evoke an element of trust between the two parties. Relaxed and unquestioning, their postures take on that of someone drifting off to sleep in a sea of serenity.

The Australian artist plays at our relationship with “otherness” and the visceral difficulty we have in accepting the oddity of an unrecognisable hybrid body.

Completed in 1998, this British artist shares an intimate snapshot of her personal life: her bed. She allows the viewer a glance of what must have been a painful period in her life: dirty sheets, cigarette butts, a bottle of vodka, used condoms and a pregnancy test are scattered around the sleeping quarters. At the time of its reveal, the raw intimacy of this work shook the contemporary art world.

A commonly depicted and many times reproduced theme in religions art, the pieta represents the mother of Christ cradling her son in her arms as he is taken down from the cross. Standing, or sitting rather, in stark contrast to the traditional renderings of Christ’s descent, Fryer’s Jesus instead rests dead and motionless in an electric chair. Though represented in a realistic manner, the body is slightly smaller than that of a human male. While it triggered mixed opinions amongst the congregation when it was first presented at the Cathedral of Gap, it still elicits empathy and compassion on behalf of the viewer.

In order to commemorate its presidency of the European Union, the Czech Government commissioned this work in 2009 and put it on display in Belgium. The modern sculpture is made of up 27 different components that represent each country in the E.U.

An already well-established provocateur in the art world, the Czech visual artist exhibited each country with its most common stereotype. France is covered with a banner that reads “On Strike!” while an IKEA logo has been slapped onto Sweden. For England, its outline is completely void – an insulting jab that almost sparked a diplomatic incident.

10. Charles Ray, The Boy with the Frog

As we have seen, Contemporary Art can go under-appreciated or perhaps misunderstood when a place of historical significance is adorned with a new, modern development. Such was the case with Jeff Koons at Versailles, and the same can be said of Charles Ray’s sculpture of a boy with a frog in Venice.

Ray, an American contemporary artist, constructed this tin sculpture to sit at the entrance of Venice’s Grand Canal, just opposite of Saint Mark’s Basilica. The installation was immediately scorned by locals. Catalysed by mutual distaste, the public eventually forced the Punta della Dogana Museum to remove the little guy as the Venetians had made it clear they preferred the 19th Century streetlight that had previously occupied the space. Unlike Copenhagen, it seems that the people of Venice are not ready for their “Little Mermaid.”