Some of history’s most iconic paintings are absolutely teeming with well-kept secrets. KAZoART is putting on its detective hat and taking you on a new series of articles dedicated to finding these hidden messages. In this first edition, join us as we take a deep-dive on the most impressive optical illusions designed by the masters of the game.

In this series focusing on the mysterious hidden messages and secrets in popular works of art, you’ll discover a plethora of optical illusions that artists have subtly slipped into the fabric of each painting, along with some truly enigmatic iconography sprinkled throughout!

5 Pieces that Have Surely Misled You

Also known as “Camera Degli Sposi“, this work of art was entirely reworked by Italian artist Andrea Mantegna between 1465 and 1474.

The room presents itself as one huge square. It’s made up of 8 meter wide walls and a ceiling that’s roughly 7 meters high. In addition, the ceiling that covers the space is slightly vaulted.

Mantegna chose this specific optical illusion so as to transform this rather grandiose space in order to give it a completely different dimension. Now decorated with scrolls and gilding, Mantegna gives the overall architectural structure a somewhat illusory effect, made up of vaults, arcades and pillars.

Moreover, the artist takes full advantage of the vaulted ceiling to create an illusory dome which appears to open to the heavens!

It’s thanks to the linear perspective scheme and the “vanishing point”, developed by Filippo Brunelleschi in 1425, that Mantegna achieves this breathtaking illusion!

For the optical illusion created by said dome, Mantegna stages a railing, around which various characters can be seen in different stages of ageing. Probably standing on a terrace, they observe from a worm’s eye view what is happening below.

Everything is set up to lure the viewer’s gaze. We are startled by a flower pot balanced on the edge of the railing. One can also be disoriented by the sight of cherubs playing with each other and sticking their heads through the half-open fence!

These architectural optical illusions are purposefully made to be observed through a meticulous lens. It is therefore necessary to understand the artist’s subtleties and ingenuity and how he uses depth in such an interesting and profound way.

A painting’s composition is all too often the perfect setting to incorporate hidden messages. Messages that the painting itself alludes to thanks to elaborate architecturally, almost mathematically precise designs.

The Brera Madonna is a perfect example of this. Painted by Italian artist Piero della Francesca, it was originally commissioned for the Duke of Urbino, Federico III da Montefeltro.

This work features a Virgin and Child on a throne, surrounded by biblical characters and the man who commissioned the work. The latter occupies a significant place in the painting as the artist places him in the foreground, kneeling in a sign of prayer.

These characters are placed in a very precise architectural setting in order to deliver the desired depth effect, topped with a niche in the shape of a scallop shell.

The architectural composition of this piece is incredibly ingenious. The vanishing point created by this linear perspective scheme appears to converge, as if by magic, on the Virgin’s face!

Thus, the entire architectural composition is shaped around her, as well as the placement of the all other characters. Indeed, the heads of all these biblical figures are depicted on the horizontal vanishing line. Moreover, their silhouettes are seemingly extended thanks to the pilasters in the background.

You are probably wondering what this egg hanging from the scallop shell represents? It’s actually a goose egg.

The egg aligns almost perfectly with both the head of the Virgin and the child’s belly-button. It represents a symbol of birth in Creationist writings and religious texts. The scallop shell symbolizes fertility!

As this architectural design was created with divine hierarchy in mind, it is evidently packed full of religious connotations. Thus the mathematical levels of precision make sense when thinking of the deeply important subject matter.

Art and Architecture on KAZoART

3. The Seasons by Giuseppe Arcimboldo

The Seasons is a series of four paintings created by Italian artist Guiseppe Arcimboldo between 1563 and 1573.

As you have rightly noticed, these four paintings illustrate profile portraits ingeniously made up of fruit, vegetables and plants each of which relating to a different season.

These four paintings are most often displayed in pairs: the faces of Winter and Autumn and those of Summer and Spring face each other.

But what you might not know is that these different faces have a hidden, much more symbolic message behind them… These heads assembled according to the seasons, actually refer to the different stages of maturity of one man’s life!

Indeed, Spring presents the features of a young man, Summer those of a young adult in their prime, Autumn illustrates a man of mature age and Winter depicts an elderly man.

This comparison between man and nature and the passing of time was a common metaphor throughout the Renaissance!

Thus, the artist plays with the different shapes of plants, fruits and vegetables in order to create recognizable, personified and pretty realistic looking faces. As a viewer, we must carefully observe each piece to fully understand the hidden messages behind what, at first glance, appear to be nothing more than still life pieces!

In 1937, the Spanish surrealist painter Salvador Dalí created his work Swans Reflecting Elephants. An expert in the art of hidden messages, Dalí constantly misleads us through interesting and enigmatic works of art!

When we observe this work without knowing its title, we first notice swans in a pond, whose silhouettes are reflected in the water. The dead trees with their tortured shapes also catch our attention.

Then, if we pay closer attention, we’re able to make out a man on the left of the composition, whose clothes seem to blend in with the side of the cliff. Above this man, strange clouds drift in the sky.

The painting, which seemed on the surface to be nothing more than a simple nature painting in landscape form, now appears more mysterious and enigmatic…

When we look even more carefully, we realize that in the reflection of the swans, we’re able to see something totally different… Indeed, we see silhouettes of elephants that seem to emerge from the water!

The heads and necks of the swans then form the trunks of the elephants, the half spread wings turn into big flapping ears. Finally, the tree trunks form in turn the body and the legs!

Moreover, with a little bit of imagination, the shape of the largest cloud seems to suggest the silhouette of man, almost mirroring the character in the middle ground.

Master of reality bending, Dalí paints from dreams. The unconscious and hallucinations are at the center of his surrealist works.

In order to set himself apart from other surrealists, Dalí creates his own method: that which he names “critical paranoia”. This method is based on psychoanalysis and the theory of Sigmund Freud, which highlights the repressed traumas that stem from childhood.

“I believe that the moment is near when by a procedure of active paranoiac thought, it will be possible to systematize confusion and contribute to the total discrediting of the world of reality.”

Inspired By Dalí on KAZoART

5. Movement in squares by Bridget Riley

Bridget Riley is a British painter of the second half of the twentieth century. She dedicated her artistic practice to geometric abstraction and the search for interesting optical effects.

The artist belongs to Op Art (optical art), an artistic movement that experiments with optical illusions. Op Art artists create works that give the impression of 3D or static images seemingly in movement.

In 1961, Bridget Riley produced Movement in Squares. She considers this work to be her very first experimentation with geometric forms and ways to make them dynamic.

For this specific piece, Riley drew black and white squares in a checkerboard pattern, one after the other. She then aligned them one by one, progressing from the left side of the canvas to the right. She does so while simultaneously maintaining their height.

However, as she progresses towards the right side of the canvas, the artist reduces the width of her squares, which then become thinner and thinner.

In one area, the squares become elongated vertical rectangles. This new composition gives the viewer an impression of three-dimensionality, even though the work is completely two-dimensional.

In this area, where the squares turn into thin, vibrant strips, we are able to perceive a sense of depth; sort of like an open book!

While observing Bridget Riley’s work, our eyes can’t quite make out what’s going on. We’re under the impression that the lines and geometric shapes are somehow in motion, ready to jump right off the canvas. However, our mind knows what’s real and what’s not and that the elements on display are nothing more than static shapes on a two-dimensional plane.

Fascinated by geometric lines and shapes, Riley wanted to give them a whole new dimension, by experimenting with the different ways our eyes react to depth effects and optical movement!

As seen with Movement in Squares, it is interesting to find the subtlety in the way geometric shapes create optical effects. Thanks to these little details, we’re able to gain a better understanding of the artist’s techniques and how they go about creating these mind-bending illusions. 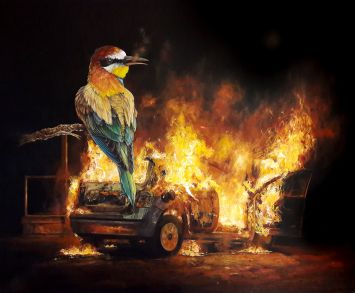 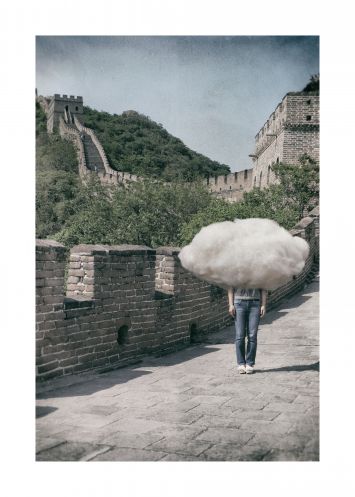 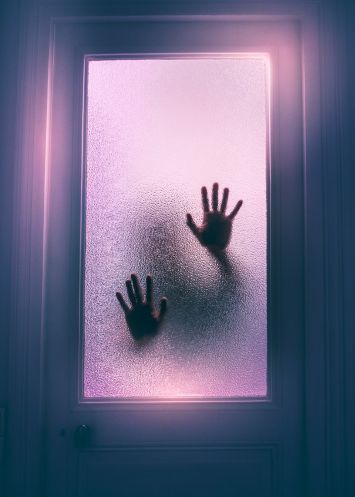 No one is innocent 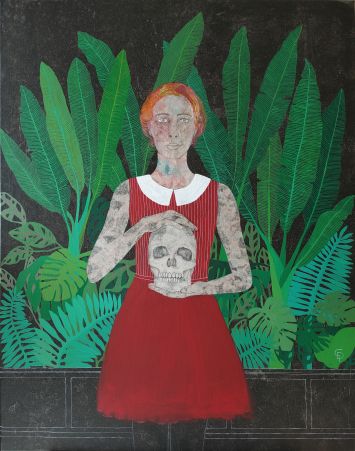 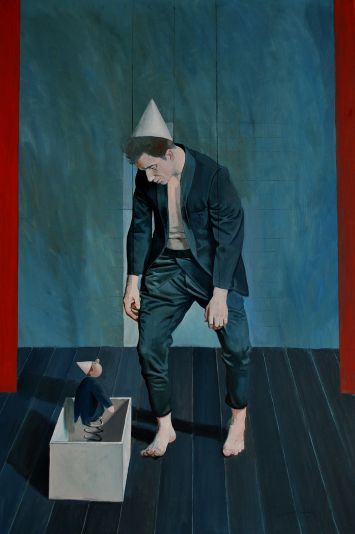 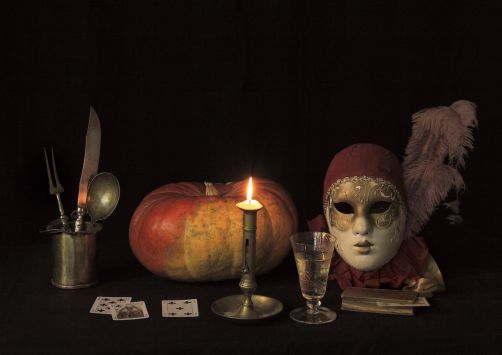 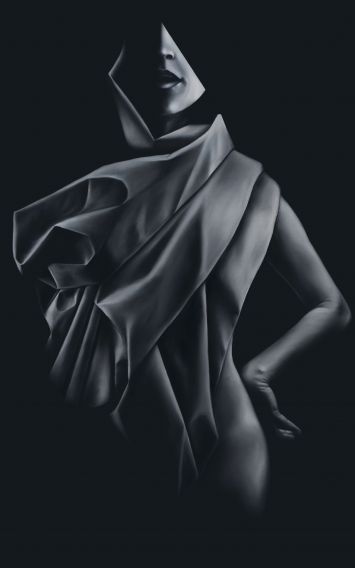 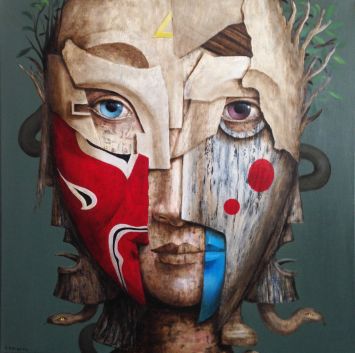