Although the 19th century artworld was dominated by men, Berthe Morisot managed to establish a name for herself as one of the leading female figures of Impressionism. Her daring and determination to simultaneously lead a life as a woman, mother and artist make her a key figure of the era. We take a look back at the incredible artist Berthe Morisot in our series Art in 60 Seconds!

#1 A woman and an artist: A joint destiny

Berthe Morisot was born in 1841 to a wealthy family, and her passion for painting was no coincidence. Her mother, the great niece of Rococo painter Jean-Honoré Fragonard, already had her own history with art.

In her middle-class Parisian family, there were two older sisters, Yves and Edma, and a younger brother, Tiburce. It was common for children to study art at the time. And what could be better than a private tutor to reveal a love of painting in the Morisot sisters.

The mission fell to Joseph Guichard, who regularly took the girls to the Louvre. There they learned to paint by copying the masterpieces on the gallery’s walls. Astonished by the Morisot girls’ talent, Guichard warned their parents,

“Given your daughters’ natural gift, they will not become simple illustrators under my instruction. They are destined to become painters. Do you understand what that means? It will be revolutionary—almost catastrophic—in your middle-class community.”

Although the older sister Edma stopped painting, Berthe Morisot became a copyist at the Louvre. This enabled her to meet other artists, including Jean-Baptiste-Camille Corot, a landscape painter who led her to plein air painting—a revelation for the young Berthe.

#2 A key figure of Impressionism

Against all odds, Morisot took the world by storm. In 1864, aged just 23, she caught the attention of the official Paris Salon (a former art show founded in 1673). The institution—which normally reserved its praise for men—gave the spotlight to the young artist, exhibiting two of her landscape paintings.

A few years later, she met Edouard Manet. Another figurehead of Impressionism, he quickly took Berthe Morisot under his wing. They shared their thoughts on each other’s work. But one thing particularly irritated the young woman: Manet’s habit of retouching her paintings.

It is thought, although it was never confirmed, that the two Impressionist artists had a more than professional relationship. Morisot sat as Manet’s muse, appearing in 12 of his paintings. But Manet was married and already had a reputation for scandal.

The partnership enabled Berthe Morisot to join the very restricted clan of Impressionist painters. She began selling more and more paintings to private dealers. Her renown increased and she gradually won her peers’ respect.

She eventually did marry Manet but not the Manet she was so fond of. It was instead Eugène, Edouard’s younger brother, who won the young artist’s heart. Some saw the marriage as a second choice and simply a marriage of convenience.

#3 Morisot’s legacy, paving the way for other female artists

Eugène was also an artist but put his own career on hold to support Morisot. Interestingly, Morisot kept her maiden name. After the marriage, Edouard Manet stopped painting Berthe.

She and Eugène eventually welcomed their first child, Julie. Unlike her sister, however, Berthe continued to create art. Her daughter was even painted by Manet and Renoir.

Morisot remains one of the greatest female impressionists of her day. Her life in Paris was shaped by the people she met in the movement and her great friendships with Edgar Degas and Mallarmé. She left a substantial legacy behind her, becoming an artist in her own right despite the prejudices of the time. As a key figure in her group of artists, she also organized the last Impressionist exhibition in 1886.

Berthe Morisot died at the age of 54. In response, her artist friends held a retrospective in tribute to her exceptional career. Her determination to become a female painter paved the way for other impressionist artists in the same era, such as Mary Cassatt and Eva Gonzalès…

“Real painters understand with a brush in their hand.”

Morisot was much-loved by her circle of friends and extremely close to Renoir, who she entrusted with teaching art to her daughter Julie. The poet Mallarmé became Julie’s legal guardian after Eugène Manet’s death in 1892. 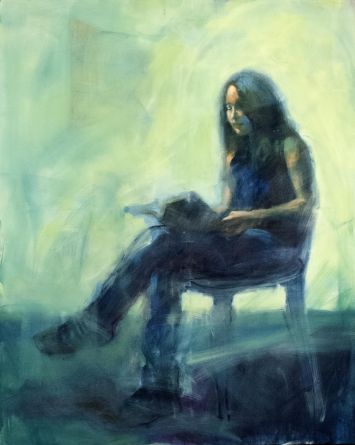