An English dandy as passionate as he is fascinating, David Hockney is one of the most influential British artists of the 20th century. His bold yet tranquil works are like a breath of fresh air. With KAZoART’s Art in a Minute, take a peek into the pastel-coloured world of the multi-faceted artist behind A Bigger Splash. 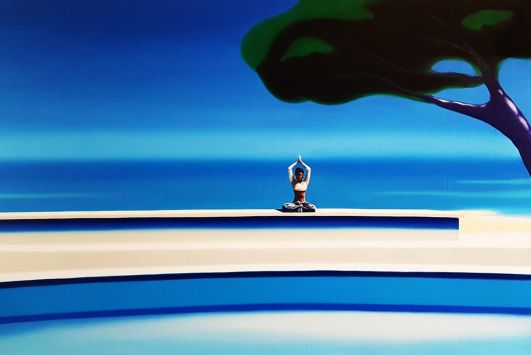 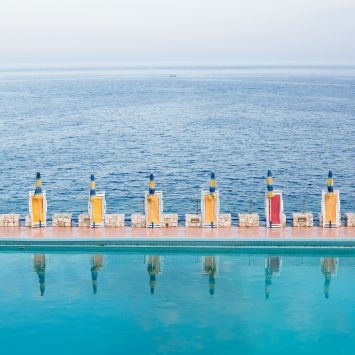 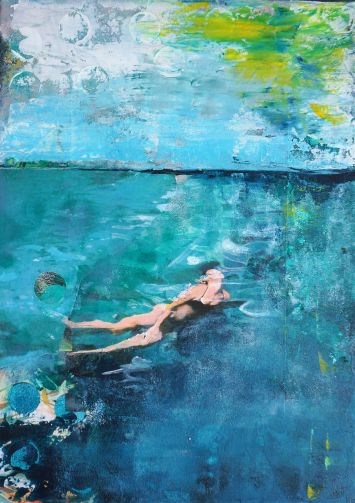 I am a mermaid 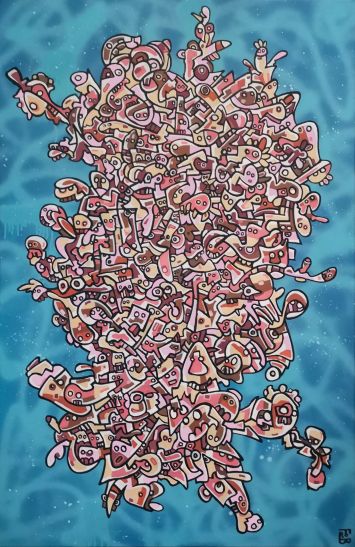 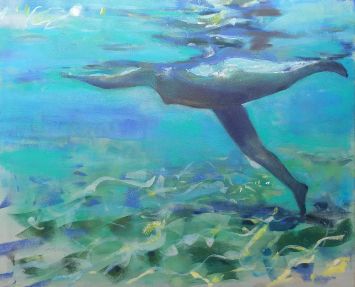 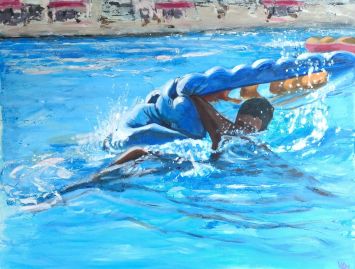 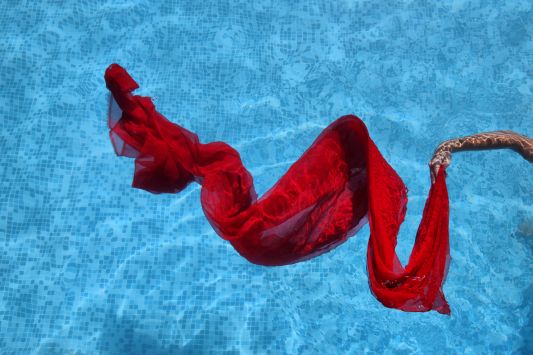 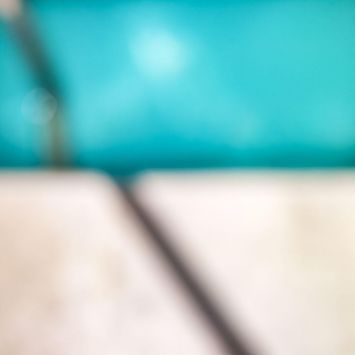 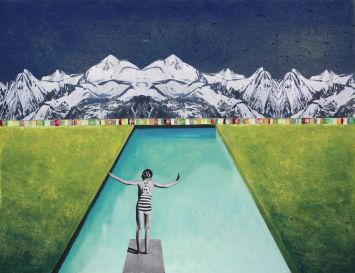 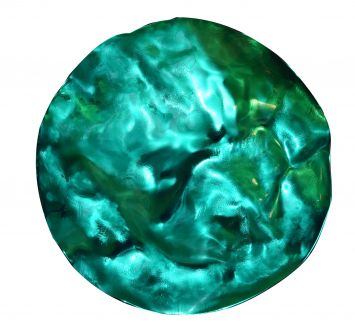 …a Briton with Californian taste

Born on July 9, 1937 in Bradford, he is the fourth child of a family of five. At the ripe age of eleven, he already sought to become an artist. A rebel at heart, he refused to join the army when drafted in 1957 and instead carried out his service to the country by working in a hospital for two years.

Graduating from the Royal College of Art in London in 1962, his career began shortly thereafter upon a trip to California. In 1964, he experienced the West coast lifestyle with its swimming pools and brightly coloured houses – all of which would later become a source of inspiration.

During this time, he began using Polaroids and acrylic paint in his work. These mediums together constituted a new medium nestled in between Pop Art and Hyperrealism.

Without question one of the most well-established artists of his generation, he paints portraits, landscapes and scenes that are not too far removed from his own reality.

He commonly depicts elements of his everyday life in Los Angeles; his house and pool, his friends, family and, of course, his men. Giving the viewer a window into his world through sparkling and colourful canvases, Hockney produces feel-good art and doesn’t ever try to hide himself or his sexuality.

…an experimenter of techniques

Did you think Hockney was just a painter? On the contrary, he is also a well-versed in photography, scenography, and drawing. He thrives in our modern-day society where technology allows one to create mixed media art. Having access to these technological advancements opened up realms of possibilities for his artistic endeavours and the quality of his work was reflected therein.

The thin layer of paint carefully spread onto the canvas gives us the impression that we’re actually looking at a photo and yet, we are not. This is the brilliance of Hockney.

Always sporting his iconic round-framed glasses, Hockney doesn’t really take his use of colour seriously and adorns his art with highly-saturated and acidic tones. In the 1970’s, Hockney’s multifaceted talent shone through when creating sets for the play Ubu Roi, which debuted in London.

From there he went on to design costumes for the Metropolitan Opera in New York and the Glyndebourne Opera Festival. In spite of these accomplishments, his work doesn’t stop there!

In the late 1970’s, he started using photocopiers, fax machines and printers to create uncommon works of art. In the same manner that Hockney never allowed his artistic imagination to be obstructed, he also didn’t allow for his artistic mediums to become antiquated in spite of the rapid technological advancement taking place in the late 20th and early 21st century.

A truly modern man, he recently took on the project of drawing landscapes on a tablet. Shown at its “Fresh Flowers” exhibition at the Pierre Bergé-Yves Saint Laurent Foundation in 2011, he exhibited drawings that were made on an iPad.

David Hockney’s life and artistic career are so fascinatingly rich that his autobiography entitled A Bigger Book weighs in at a cumbersome 35 kg. The 500-page book recounts around 60 years of his existence starting with his childhood, his time at the Bradford Art School, his life in Los Angeles, his 2.0 portraits and his luscious Yorkshire landscapes. According to The Guardian, this volume weighs about the same as a chair.

“I think I’m greedy, but I’m not greedy for money – I think that can be a burden – I’m greedy for an exciting life. I want it to be exciting all the time, and I get it, actually. On the other hand, I can find excitement, I admit, in raindrops falling on a puddle and a lot of people wouldn’t. I intend to have it exciting until the day I fall over.”

A Bigger Splash is undoubtedly the work that set Hockney’s career in motion. Arranged on an almost 2-dimensional scale, the 50‘s style house creates a serene setting whose static appearance is interrupted by the large splash in the pool. A 1974 documentary directed by Jack Hazan was given the same name and attributed to yours truly, David Hockney

I am a mermaid