Immerse yourself in the world of Frank Schroeder, an expressive and deliberate artist whose works overflow with colour and narrative. Always returning to his roots, they serve as a constant source of inspiration. His highly sought-after compositions pay tribute to his origins while placing his viewers at the crossroads of nature, fears and reality. Frank Schroeder has achieved international notoriety and exhibits in some of the most prestigious galleries and contemporary art fairs around the world. This week, KAZoART sat down with him to listen to his story…

Artwork by Frank Schroeder on KAZoART 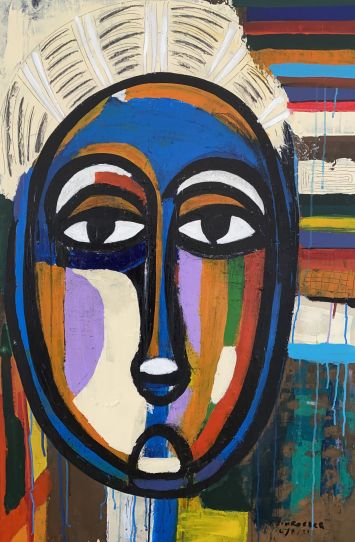 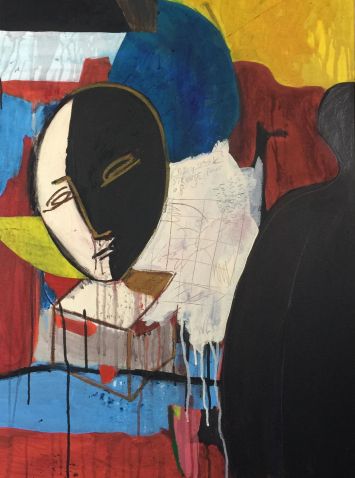 Born to a French mother and a West African father, Frank Schroeder has always been immersed in cultural traditions from two continents. When he was very young, his family left France for Côte d’Ivoire and moved to a small low-cost housing project without television.

He thus found both comfort and entertainment in music, art and reading. His bedside book was none other than 100 Masterpieces of the Louvre. Reading it cover to cover every day allowed him to have a slow yet powerful revelation. He started to spend entire days reproducing gouache paintings, including those by Géricault and Delacroix. He then went on to study art which only deepened this creative passion.

To realise his paintings, he uses new technology. Equipped with his tablet, he first experiments with shapes, colours and proportions before deciding on a composition. He then projects it onto the canvas, this is where the magic happens. Working with collages, acrylic paint and oil pastels, Schroeder’s final product always differs greatly from his initial concept.

From Ethnicity to Mythology

Frank Schroeder is particularly inspired by 20th century American and European painting. Among his main inspirations are Matisse, Picasso, the CoBrA collective and Basquiat’s urban art. He also dabbles in religious representation and often depicts the great myths that have shaped Western culture.

Themes of ethnicity and origin are constantly appearing in Schroeder’s compositions. His most recent series, Black Politics consists of 50 paintings and draws inspiration from African masquerade masks and incorporates a unique and original staging.

Today, through my Black politics, I try to convey a very personal idea that shines a light onto my origins.

Solitude, silence and waiting are also recurring subjects that Frank Schroeder translates onto the canvas.

Schroeder considers each painting to be a story, something to make the viewer fall down the rabbit hole, much like in Alice in Wonderland. He never stops at a simple representation, there’s always something more.

Upon his first exhibition in Barcelona, the gallery that was supposed to house his works ended up being too small to display everything he wanted to present. They then designed a “full show” that could accommodate his work by laying these simple ground rules:

Today this painter has an international reputation and has exhibited in Barcelona, Edinburgh, Chicago, London and many other places. Not to mention his home country, Côte d’Ivoire.

In late 2019, Frank Schroeder will be exhibiting in Atlanta, Georgia again. He will present a selection of works from his Black Politics series while working in parallel on the third edition of The Last Supper, which measures 3 x 2 metres and is of course made in his own unique style.

Meet the artists, Our artists in studio

Artist Interview: In the studio with Philippe Marlats