Georges Braque is a French artist and founder of the Cubist movement. First an Impressionist and then a Fauvist, Braque was already an avant-garde painter before developing the movement, heavily influenced by the techniques of Paul Cézanne, coloring his canvases with bright colors and inventive compositions. After seeing Pablo Picasso's Les Demoiselles d'Avignon (1907) in his studio, Braque explored its fractured perspective and incorporated it into his own work. Picasso and Braque would develop the Cubist aesthetic, refining its dramatic points of view and introducing elements of collage into revolutionary works that challenged preconceived notions of illusionism, painting and sight. From this point on, the "Braque-Picasso Ropeway" begins; with these two artists constantly researching and confronting each other. "What the meeting between Picasso and Braque brings out is that the motif is no longer painting..." (Pierre Daix). Braque and Picasso are often referred to as "the founders of Cubism".

Braque never stops inventing: he sculpts paper, cardboard, he cuts and glues, he mixes sawdust, sand ... The artist will make the decoration of the ceiling of the Etruscan room of the Louvre on the theme of the bird. He thus became the first painter to be exhibited in the Louvre during his lifetime.

This theme will be the subject of many of his works, the bird and the star will be for Braque the symbol of Freedom: "Freedom is not accessible to everyone. For many, it is placed between defense and permission." Georges Braque

The artist died in Paris on August 31, 1963 at the height of a brilliant and glorious career, he was one of the most influential artists of the twentieth century and the most prolific.

During his high school studies, he attended evening classes at the École des Beaux-Arts where he rubbed shoulders with Othon Friesz and Raoul Dufy, his elders. In 1899, he started working in the family business and learned the trade of decorative painter, which he perfected in Paris with Laberthe. Braque arrived in Paris in 1900 to perfect his craft training; he attended evening classes at the Ecole des Batignolles. In 1902, after his military service, he entered the Humbert academy in Montmartre and in 1903, he made a short stay at the École des Beaux-Arts in Bonnat's studio.

(Non-exhaustive list, many exhibitions are devoted to this master internationally)

The work of artist 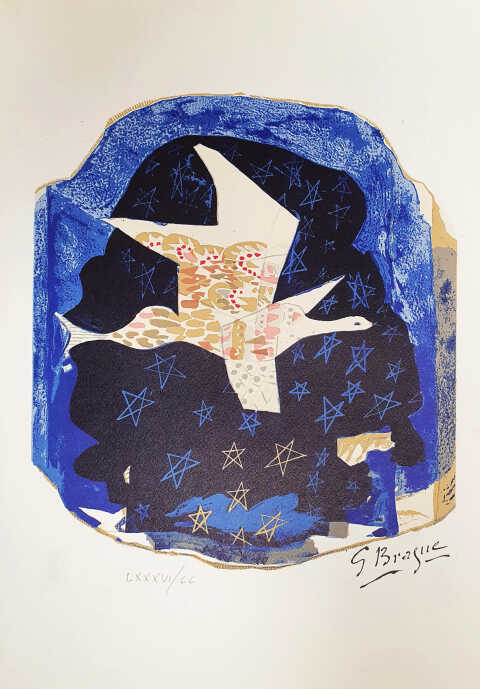