Born in 1967 in Roskilde, Denmark, Kenneth Blom moved to Norway as a child. He studied at the Statens Kunstakademi in Oslo (1990-1994), as well as at the Düsseldorf Academy of Fine Arts (1994-1995). He has shown extensively in Europe, including as a featured artist at Sotheby's New Bond Street in London,[1] at the Henie Onstad Kunstsenter in Norway, Beijing Fine Arts in Beijing/Hong Kong[2] and regularly at Galleri Haaken in Oslo. Blom currently lives and produces art in Oslo.

Blom's paintings address the relationships between figure and industrial environment. His spaces are typically rendered to speak of vast empty spaces, and his figures are often placed sparsely. Though architectural structure is clearly an important part of Blom's work, they are rendered often with gestural brushstrokes and vivid color, and his figures are depicted with the same blend of vaguery and precision. These elements combine to create psychologically independent, solitary worlds.

The work of artist 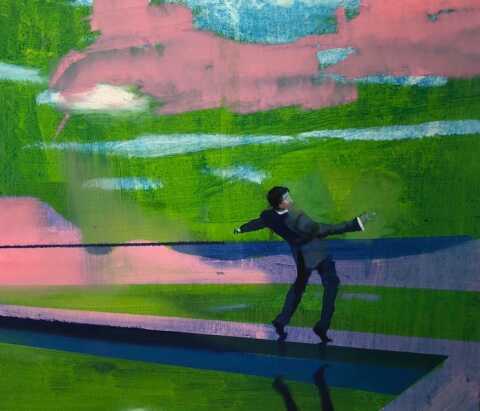