Russian painter, Kasimir Malevitch (1878-1935) is considered one of the most emblematic artists of abstract art.

Born in Kiev, the artist moved to Moscow in 1904. He first worked as an industrial designer before studying drawing and attending the Kiev School of Painting at the age of 17.

Malevich was finally a self-taught artist who tried out several artistic styles at the beginning of his career. His first paintings, figurative, are impressionist and expressionist.

From 1915 on, Malevich's artistic and plastic concerns evolved. More and more opposed to traditional and academic art, the artist chose to reject figuration in favor of a world without objects.

Thus, Malevich increasingly radicalized his compositions, which were henceforth intended to be abstract. He presented for the first time at the 0.10 Exhibition in Petrograd a group of 39 works that he called "Supremacies". 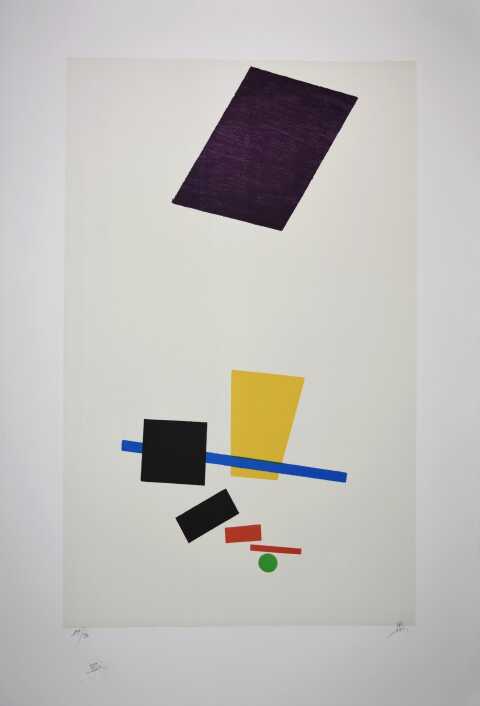 Alfred H. Barr Jr. included several paintings in the groundbreaking exhibition "Cubism and Abstract Art" at the Museum of Modern Art in New York in 1936.

In 1939, the Museum of Non-Objective Painting opened in New York, whose founder, Solomon R. Guggenheim - an early collector and enthusiast of the Russian avant-garde - was inspired by the same aesthetic ideals and spiritual quest as Malevich's art.

The first American retrospective of Malevich's work in 1973 at the Solomon R. Guggenheim Museum.

However, most of Malevich's work and the history of the Russian avant-garde remained under lock and key until Glasnost.

In 1989, the Stedelijk Museum in Amsterdam organized the first large-scale retrospective of Malevich in the West, including his paintings and works from the collection of Russian art critic Nikolai Khardzhiev.