Alberto Vejarano, known as CHANOIR, is a French-Colombian artist born in 1976 in Bogotá. Internationally renowned, he is famous for the energy and optimism of his graffiti. CHANOIR works with a universal visual language, based on the belief that art and artists are agents of positive change.

In the mid-1990s, under the influence of pioneering artists such as Keith Haring, or the Parisian André, he decided to use the spray can as a means of expression. CHANOIR's work, which is born in the fusion of Pop Art and Free Figuration, calls upon knowledge of art history and is nourished by popular humor, childhood memories and a sense of contemporary aesthetics. He develops a graphic style marked by resolute colors, flat planes and figures with simplified and immediate forms, characteristic of both logos and tags.

A cat lover, CHANOIR chose his name in reference to Steinlen's poster: "le cabaret du chat noir". His cat logotypes "CHA", drawn in a spontaneous way, change shapes constantly. Naïve and always expressive, they communicate their emotions to passers-by, according to the artist's feelings. A relationship is established with the public. His father, Gustavo Vejarano, Colombian artist and esoteric, transmits to him his beliefs on the subtle planes. Thus, art is for CHANOIR a transmission of energy from spirit to spirit, with the objective of entertaining and playing with the spectator by creating an art for all. 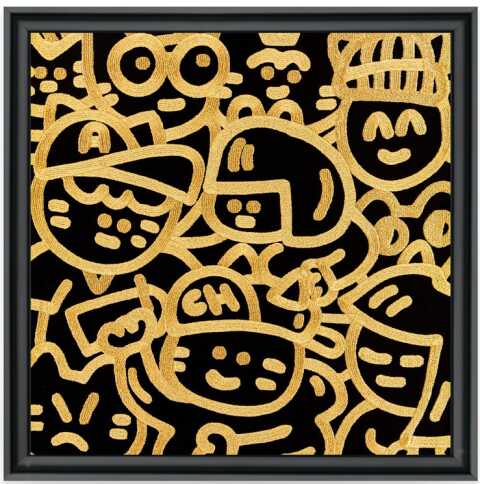 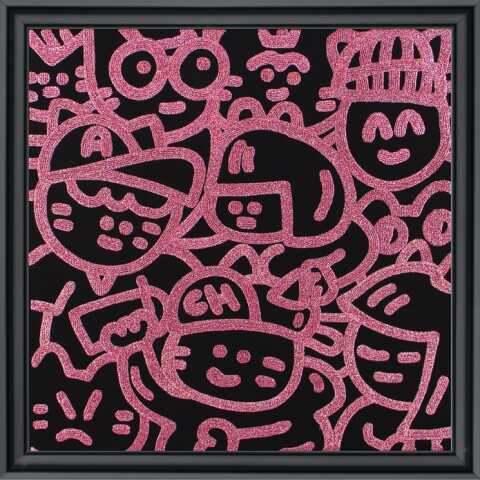 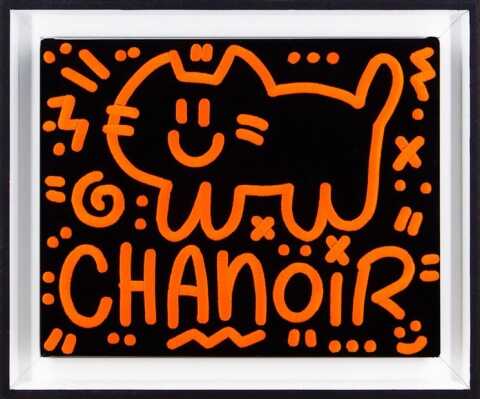 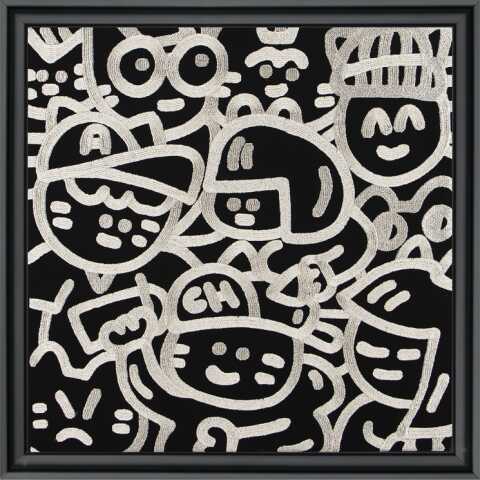 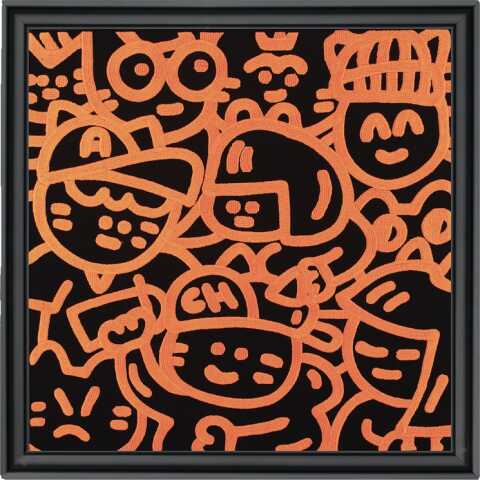 In 1997, he entered the Beaux-Arts de Paris and obtained his diploma from Jean-Michel Alberola. He then rubs shoulders with the painters of free figuration, François Boisrond and the Di Rosa brothers, with whom he shares a taste for spontaneous and libertarian expression. He then joined the movement of modest art by participating in the documentary "Un monde modeste" directed by Stéphane Sinde. Jean-Michel Basquiat is a major source of inspiration for CHANOIR, but also icons such as Snoopy, Barbapapa, Mr. Madame, Hello Kitty, the Shadoks, the Smurfs or more recently Gumball. He is also passionate about cave art, his totemic paintings evoke the mystical power of primitive arts.

Nomadic artist, CHANOIR mixes, for 25 years, work on canvas in studio and tags with spray cans in the streets of Paris, Barcelona, Bogota or Winwood Miami, where regularly accompany the artists El Xupet Negre and El Pez. He became particularly active on the walls of Barcelona in the early 2000s and made the documentary "Free Walls" about the best years of Barcelona Street Art. He then founded the 1980 collective with, among others, Jean-Philippe Illanes, Alexandre Sirvin, Hugo Garcia, and Ernest Añaños Montoto. In 2003, he invested the Colombian art scene by participating in numerous exhibitions, such as the personal exhibition "Mi complejo de Peter Pan" at the La Cometa Gallery, and at the Museum of Modern Art in Bogotá. It was during these years that he met the artist Nadín Ospina, who still influences his work today. He then began an international career from Miami to Los Angeles, from Beijing to Costa Rica, passing through Rome, Oslo, London and Brussels.

In 2009, he definitively established his studio in Paris, and presented with the 1980 collective a poetic installation of interactive graffiti "taguer la lune" as well as several frescoes for the exhibition "Né dans la rue - Graffiti" at the Fondation Cartier. His paintings are presented in galleries and at auctions organized by the most prestigious auction houses (Artcurial, Drouot). He was then called upon to work with major brands such as Samsung, Emanuel Ungaro, Cacharel, Ubisoft for Just Dance, and Disney.

In 2019, he was named Chevalier des Arts et des Lettres by the Minister of Culture Franck Riester.